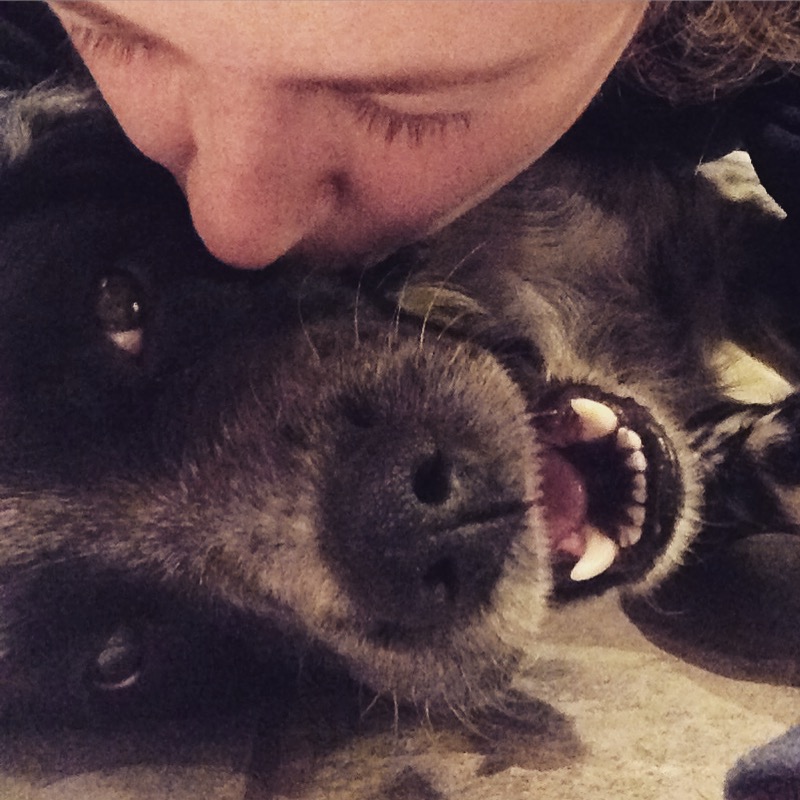 Visiting ARK with my family

My family and I are self confessed crazy animal lovers. We had visited several Greek islands and were familiar with the desperate need for help with animal shelters in Greece. It was because of Animal Rescue Kefalonia  (ARK) that we chose Kefalonia as our vacation destination.

We first visited the ARK shelter a couple of days after arriving on the island. As we passed through the gates, the first thing we saw was a pen full of puppies of varying sizes and colours. They were beautiful and very noisy! We made our way into the heart of the heart of the shelter.  All of us were overwhelmed by the number of animals and the size of the shelter.

We volunteered our help at the shelter several times that holiday. Every evening we left the shelter to return to our hotel there was a black and white puppy who always lingered by the gate.

I fell in love! I couldn’t resist the big brown eyes staring at me. Each time I tried to cuddle him he playfully bit me, but this puppy had touched something in my heart and I knew he was for me.

Adopting a dog from Kefalonia was new to me.  I used Google, sent emails and made phone calls every evening at our hotel to plan the puppies journey to Norway. Luckily, the airplane I was travelling back with had room for the puppy,( now named Yatzy after the game with with dices because of the spots on his legs) in the cargo hold.

We then had to arrange his passport. He was vaccinated, treated for worms and microchipped. We bought the travelling crate for him and then we were ready to leave.

It took quite some time to get everything ready for Yatzy’s journey as we did not know Kefalonia, but we made it on time and we travelled back together.

I must say the hotel we were staying in were very helpful, they allowed us to have him in our room.

Yatzy’s introduction to his new family

As Yatzy was only about four months old the journey took the edge off him. He was very tired when we landed in Norway. I remember my aunt picked us up at the airport (the rest of my closest family were still on Kefalonia) and he slept on my lap all the way home.

When we arrived home, our two other dogs were a bit confused by this new little intruder. However, they accepted him pretty quickly even though he really annoyed them at times. My aunt and my two cousins (only 1.5 and 3 years old at the time) thought he was very cute and played with him in my garden for a few minutes before he fell asleep (again).

The funny thing was that no one had believed me when I said I was bringing a dog back. My grandparents had an enormous surprise when they came to visit…

How Yatzy settled into my life and his new life

He settled really well into my life. We started taking obedience classes, first with other puppies and then with older dogs. Yatzy was the best puppy I could have ever had. We even competed a little bit for fun, and we both loved it. We also tried doing some agility, but he is a bit to clumsy, and his body isn’t really built to run fast and jump at the same time.

We love being outside, and hiking in the forest or in the mountains is our favourite activity. At the same time, he also loves to cuddle on the couch on rainy days, as do I. He is the most perfect dog I could have ever imagined.

Today, he lives a happy life together with his brother Snoopy (also an Arkie), his little sister, Ella (her mother was at ARK) and his older “auntie” Tia (from the Greek island Chios) who are all Greek dogs.

We encountered a few speed bumps when he hit puberty.  Yatzy was biting a lot to play (especially my mom, who didn’t enjoy that a lot…) and he ate our couch! But, we got through it together and I am so incredibly happy that I chose to have him in my life. Apart from him being a little rebel in his puberty, we really haven’t met any big problems. He is a wonderful creature and I love him to bits.

Was it a good adoption, would I consider it again?

Adopting an Arkie is the best choice I’ve made in my entire life, and that is why I am now doing it again; Little Alma (Fernanda at ARK) is soon coming to Norway to accompany us in our new home, and we’re both looking very much forward to welcome her.

Marthe and her sister Synne created ARK Norway  to spread awareness of Animal Rescue Kefalonia in Norway after meeting Marina Machado and seeing the amazing work she and her team carry out every day of the year.