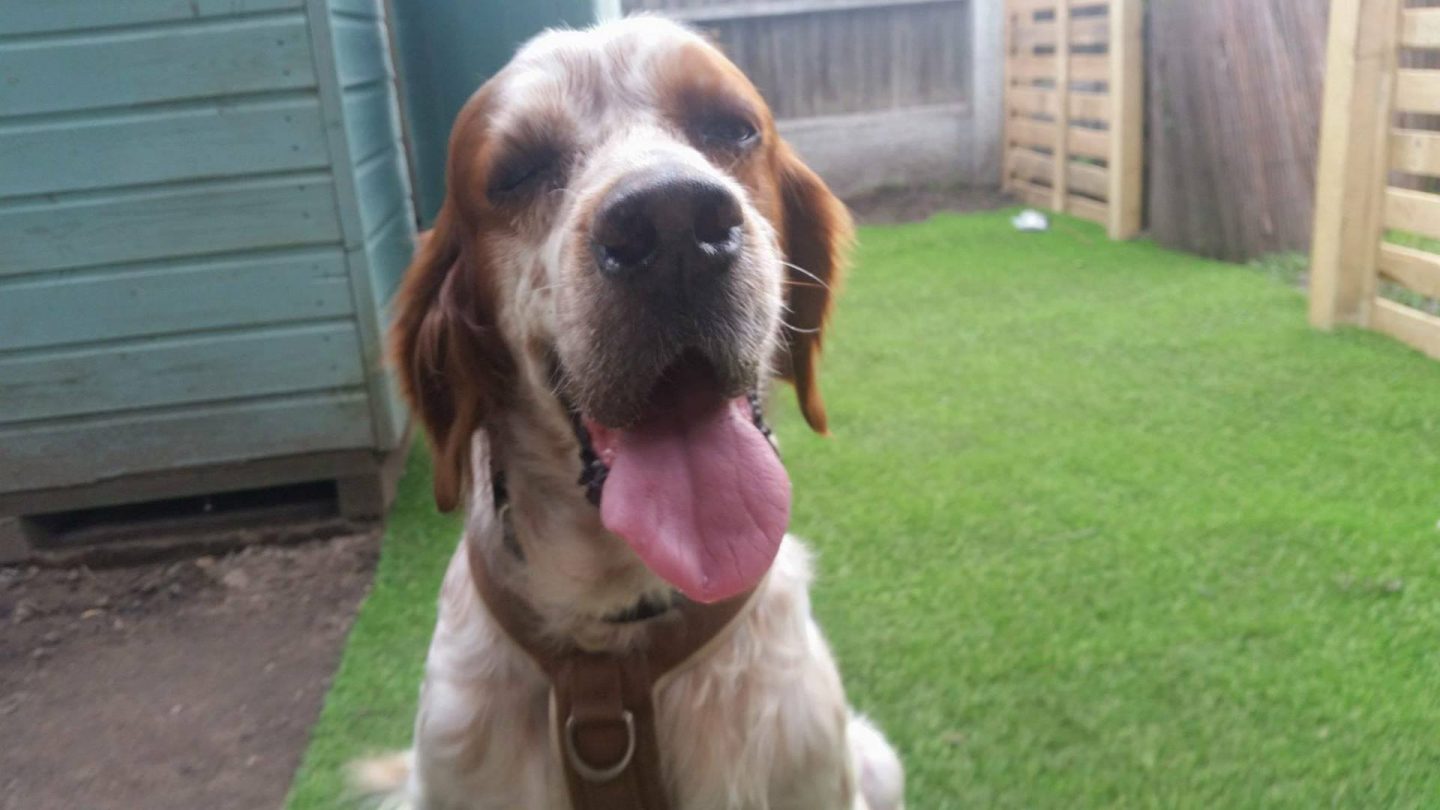 How we adopted our lovely Greek shelter dog

by Julie Longden and Megan Troop

We first saw Oddessea in a Facebook video published by ARK Doris UK. Theresa Keohane had been to visit Animal Rescue Kefalonia (ARK) and spent hours photographing and videoing the ARK residents.

The video started and this amazing English Setter touched our hearts. Oddessea had been badly neglected, he had been shot at and most likely poisoned. When we first met him he was around eight years old. Five of those years had been spent at ARK.

We decided there and then that we needed to do something to help this beautiful dog. We contacted Animal Rescue Kefalonia and set up a sponsorship for him. Sponsoring would help,  but it was not enough!

An idea was forming …

We couldn’t get Oddessea out of our minds, so whilst on holiday in May my daughter and I set out to meet him. We went to the ARK shelter and we were overwhelmed! Seeing the work that is carried out daily by the ARK team moved us to tears, they were all amazing!

We met Oddessea and fell in love instantly and made a promise to come and take him.

Megan, my truly awesome daughter, gave up her job in the UK and went to volunteer at ARK. Every day for four weeks Megan went to the shelter and spent time with him, the bond they formed grew stronger every day. During this time we were making plans to bring this beautiful English Setter (type) home to our family.

After four weeks at the shelter Megan volunteered with the Kefalonia Wildlife Sense turtle conservation group, and every time she was on harbour shift she went to sit with, talk to and play with Oddessea. It was noticed that he appeared to be a little down when Megan was not there but cheered up as soon as she entered his enclosure.

Getting ready to fly …

Before Oddessea could fly to the UK he had to have a microchip inserted ( we were so happy – his passport stated us as his parents), he had all his jabs and blood tests taken. The vets on Kefalonia are excellent, they are genuinely happy to see a shelter dog adopted.

The days passed slowly for us in the run up to Oddessea’s flight. KAT’s (Kefalonia Animal Trust) provided invaluable help with arranging  travel for which we are so grateful. We used this time to get ready for his arrival. It was a slightly anxious time for us as we already had two dogs, three cats and a little brood of chickens. During our adoption discussions with Marina we were told that he had been adopted before but had been returned to the shelter. The reason he was returned to ARK was because he was ‘nasty’ with the other dogs that were at the family home.

Megan and I flew home on the 15th August and Oddessea joined us on the 16th. Our anxious feelings disappeared  immediately. He was a total gentleman and our other pets fell under his spell as we had. We have never seen one sign of aggression from him.

This was our first dog adoption from a country outside of the UK.

Nothing could have prepared me for how he reacted to his new surroundings and his new family. In the first few days he trembled with excitement at all the new smells on the walks we had.  Constant human contact was new  to him and  seemed overwhelmed. Oddessea enjoyed running through the garden, he didn’t care if he was running on the lawn or through the flower beds! It was all just great fun for him.

Megan had built such a good relationship with him that she decided to sleep downstairs with him so that he would not be anxious. We had all agreed that we were going to give 100% to help him settle in and that we would do whatever it takes to make it work.

Everything was new for our Greek boy

At the beginning Oddessea couldn’t distinguish between things like wellington boots and his toys, everything was new to him and extremely good for playing with. One day he tried to bury one of my wellies, maybe he wanted to keep it for later!

We have been training Oddessea to sit and stay, we did wonder initially if we would need help from a trainer but with a little help from Google we have taught him these basic commands. It is true, you can teach an old dog new tricks.

It is such a pleasure to walk Oddessea. His lead training is going well and he is becoming quite a celebrity in our village. People come up to say hello and pet him every time we are out. He is such a gentle dog he takes it all in his stride.

During our walks Oddessea keeps looking at us as if to make sure we are still there. It is most important to continue to build the trust he has trust in us. We  are here for him and he will never be alone again. They say dogs are not expressive but we are sure he looks at us with gratitude and love.

We have no regrets whatsoever in adopting Oddessea, he has enriched our lives in ways that we cannot put into words. We have learnt different ways of teaching him using positive training methods. 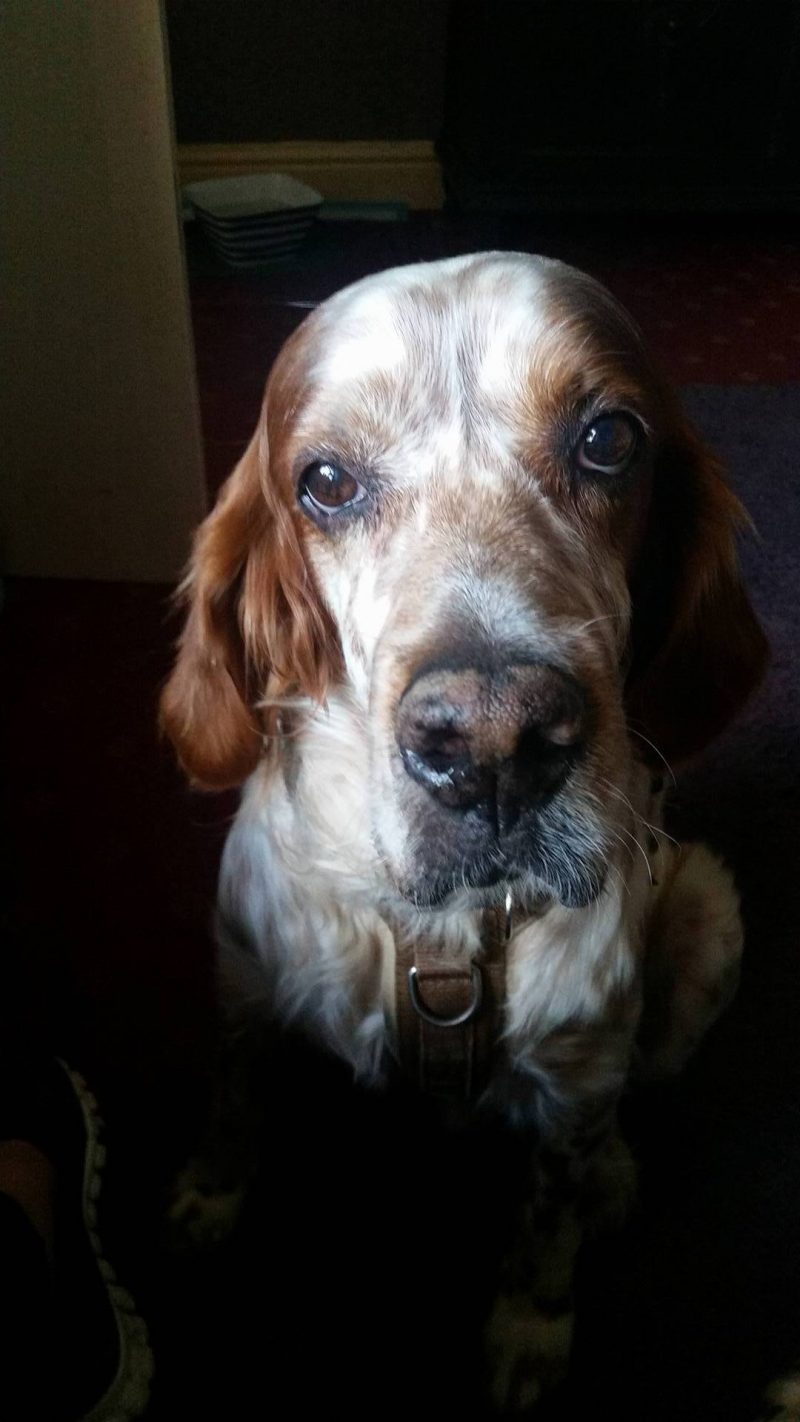