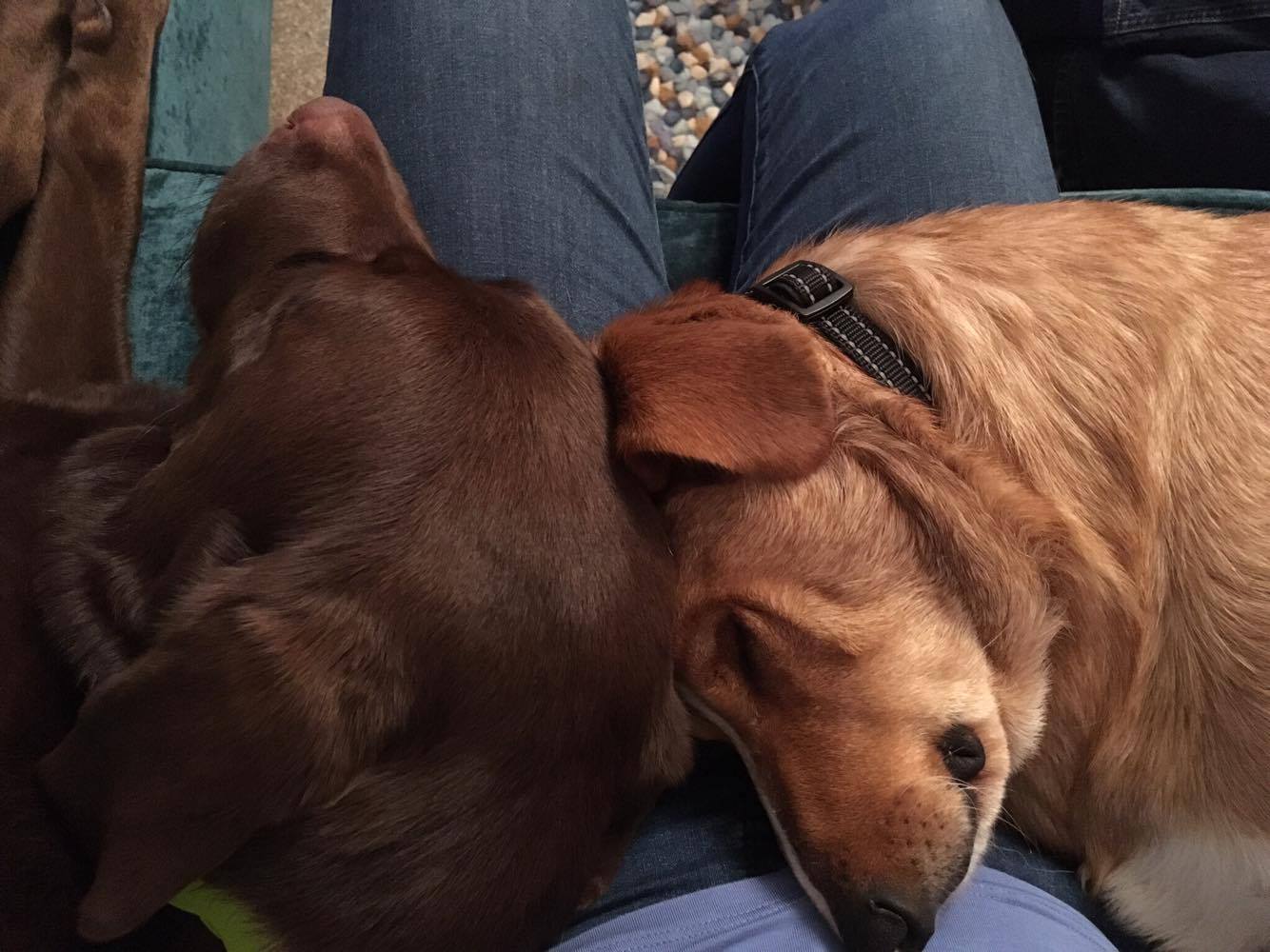 Lucy Knight’s story of how she and her family came to adopt a Greek shelter dog.

In August 2016, we went on holiday to Kefalonia for my 40th birthday, with our kids Oscar (6) & Grace (3). We didn’t for one second think this would eventually lead to us making a canine addition to our family!

On the last day of our holiday, we visited Animal Rescue Kefalonia (ARK) in Argostoli. We were struck by the dedication of the volunteers, the huge number of animals reliant on them and the tough conditions. We left a donation and went to catch our flight.

Back at home, life and work got in the way, but ARK kept coming back into my mind. Every so often I would make another donation.

Then in May 2017 a video appeared in my Facebook feed. It was volunteer and founder of ARK Doris UK Teresa Keohane together with a sandy and white 3.5 year old male dog called Miro.

In the video, Teresa described how he had been nearly paralysed in an earthquake and hadn’t been able to walk for 3 months. He’d been trapped by a wall and left to die in the street until ARK rescued him and nursed him back to health.

I commented on the video ‘if any dog deserves a home this one does’. But we couldn’t adopt him, or so I thought! Our chocolate Labrador Nelly doesn’t like dogs she doesn’t know and her reactions when we’re out walking are unpredictable. Oh, and we have 4 cats! It seemed the most sensible thing to do was to make another donation and put Miro out of our minds. Surely someone else would adopt him?

Could we adopt Miro?

In September 2017, after watching the video again I contacted Teresa, who told me no-one else had enquired about adopting Miro. Teresa gave me the number of Julie, who had herself adopted a dog from ARK.

Julie was brilliant to talk to, answering all my questions honestly and sharing her story. When you adopt a dog you have to be 100% committed – they have been through so much.

Our minds were made up, we were going to adopt Miro and we would find a way to make it work. We made a donation to cover all costs. ARK arranged veterinary tests, vaccinations and a travel crate. ARK put me in touch with Pat Dolman who booked Miro’s flight to Manchester.

And so it was that on 10th October we found ourselves nervously waiting to meet Miro. I don’t think anyone on the Thomas Cook flight from Kefalonia that evening would have realised the plane was carrying very precious cargo indeed!

ARK had told us what a special dog he was and we bonded instantly with him. All he wanted from the moment he arrived was cuddles.

Picking Miro up at the airport

We managed to get a collar and lead on him and walked him to our car, which was when the fun started. He couldn’t jump into the car and did not want to be lifted! Then he slipped his collar and we spent a nervous few minutes coaxing him back to us. Finally, we laid a trail of food onto the back seat and once in he curled up on my lap and we cuddled all the way home. 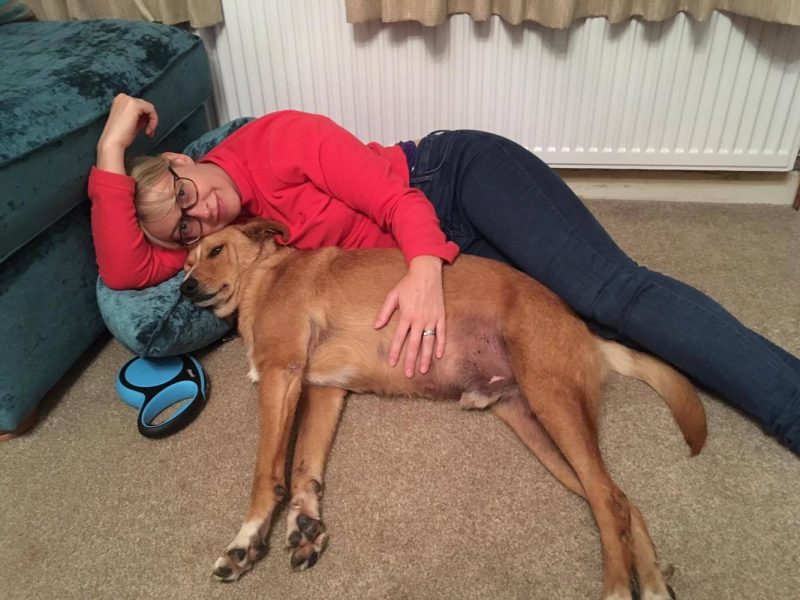 Miro coped fantastically with a meet and greet from two very excited children up past their bedtime! 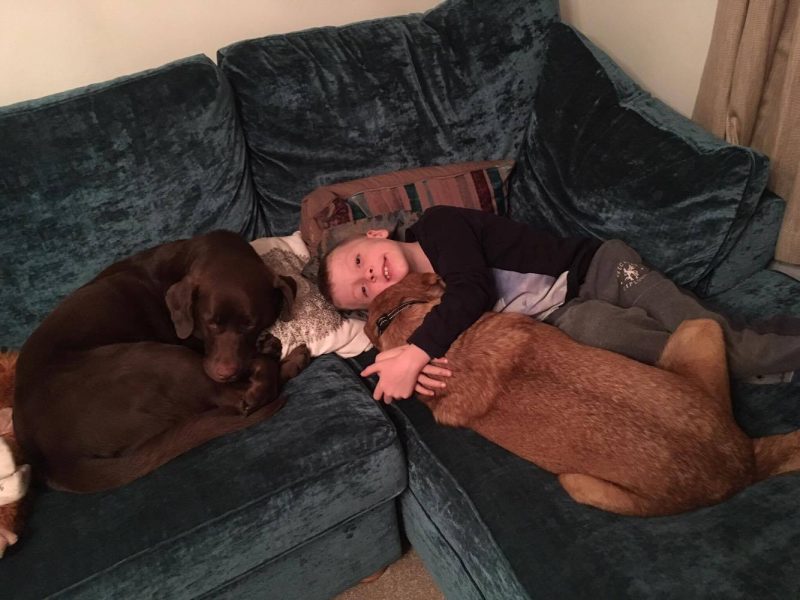 Oscar with Miro and Nelly

Introducing Miro to Nelly the Labrador ….

The real question was whether the dogs would get on and we decided to take things slowly. We kept them separately initially and took them on parallel lead walks.

Then we progressed to feeding them treats on either side of a baby gate. One day I got back from dropping the kids off at school to find Nelly had vaulted the baby gate and they were both on the same side! It seemed they had decided for themselves that the time was right.

Since then they have been inseparable and now they even curl up and sleep together.

Miro gives us back so much. It is so rewarding seeing his reactions to things our Labrador Nelly takes for granted. I learned that sometimes it’s better to let your heart rule your head. Our family is so much the better for having Miro in it.

We would like to say a huge thank you to everyone who worked to make this happen and who has helped to settle Miro into his new life.